As a instructor in cram school, I love frequently talking about different subjects about the modern merchandise, products, and goods. From their quality to their business strategies. And there is one thing that matters, and also bothers the consumers a little bit, which is the topical subject we’d like to discuss and introduce to you today- The market lifespan of smartphones.

To begins with, in case you are mistaken, I have to say I am talking about Nexus smartphones, and not judging anything or making some critical comments. Just try to speak of my heart and show reader some data I found on Google. For the first part, speaking of lifespan of modern products, you may found the durability and lastingness don’t really satisfy us that much, and we all know this is manufactures’ strategies- Try not to make products last long; therefore, they can increase the sales annually. However, this is definitely not a good sign for consumers. Next, even though the product itself are pretty durable, taking smartphones as examples. The reality can sometimes be very cruel, making its market lifespan even shorter than before, and users have no choice but say goodbye to the old ones because the new smartphones come up really fast.

Well, nevertheless, perhaps there are still a lot of people, on the contrary, do enjoy this kind of “quick cycle” or “short period.” 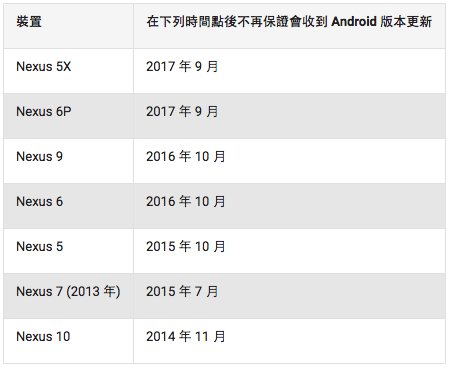 With the help of this chart, you can clearly understand when your Nexus smartphone won’t receive any new update and upgrade. So you may plan on your next time of purchasing a new Nexus smartphone. Based on the chart above, apparently and pretty soon, users have to say goodbye to Nexus 6 and Nexus 9, and now I am so curious and look forward to seeing what the next Nexus will be.